Deoxyribonucelic acid (DNA) is a very long macromolecule that is present (mainly) in the nucleus of virtually every cell in our body. The function of DNA is two-fold; firstly to carry genetic information as a sequence of bases that encode discrete entities known as genes, which in turn, are translated into a functionally diverse array of proteins. The second function of DNA is to transmit this genetic code to the next generation of daughter cells; for germ cells this relates to the inheritance of the genetic code from parent to child, whilst for somatic cells (any cell of the body other than germ cells e.g. liver cell or blood cell), this relates to the formation of new cells in the proliferating tissue. The classical Watson & Crick model of DNA is well known however DNA does not exist in the cell nucleus as a long double helix, instead it is effectively packaged into discrete bodies known as chromosomes (Fig 1). The normal chromosome constitution for human somatic cells is 46 chromosomes (23 inherited from each parent); 46,XX for females and 46,XY for males. The discipline termed as Cytogenetics is the study of the structural and numerical integrity of this chromosome constitution. 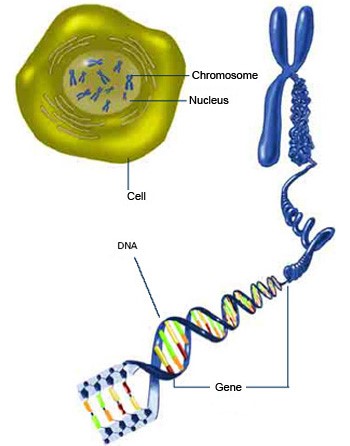 Fig 1: Each of the cells 46 chromosomes is a package of DNA. 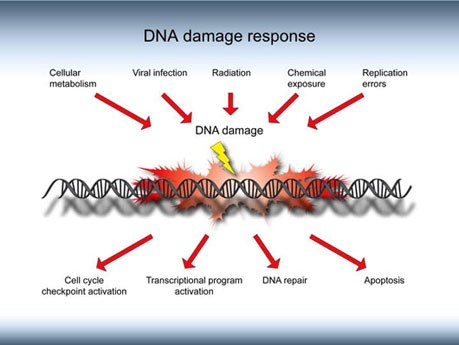 DNA, like all molecules in our bodies, can be damaged by a whole range of normal biological processes such as metabolism and also, external factors such as viruses, chemicals and radiation (Fig 2). Because of the importance to maintain a stable genetic code, cells have evolved very efficient DNA repair mechanisms meaning that most of this damage is correctly repaired. However, damage may be incorrectly repaired potentially leading to a change in the sequence of the genetic code, known as a DNA mutation. If more than one DNA molecule (chromosome) is damaged there is a chance incorrect repair could take place with a different chromosome, resulting in a structural chromosome rearrangement or abnormality. Fig 3 illustrates two possible outcomes of incorrect DNA repair from two chromosomes each with a single break (Fig 3a); the formation of a reciprocal exchange where each abnormal chromosome has a single constriction (centromere) (Fig 3b) or, a dicentric + acentric fragment may be formed, where one abnormal chromosome has two centromeres whilst the other has none (Fig 3c). We can think of these two outcomes as being different patterns, whereby the dicentric + acentric fragment pattern is unstable and unlikely to persist through many cell divisions meaning that its formation is most likely a consequence of a recent damage event. By contrast, the reciprocal exchange is stable and can be transmitted though cell divisions meaning this aberration could have been formed from damage in the distant past.

Our genetic constitution refers to the composition of chromosomes we are born with and is the same in all cells of our bodies. Cytogenetics can be used to determine if this constitution is normal or abnormal and if the latter, how this may relate to various known clinical disorders. By contrast acquired changes to the genome arise throughout our lifetime and can occur by the damage processes mentioned above meaning that patterns of chromosomal abnormality will differ on a cell-cell basis and, will increase in frequency of occurrence with age. Cytogenetics can therefore also be used to ask if the patterns and frequencies of acquired aberrations are similar, or different, between similarly aged but distinct populations of individuals.