Investigating the DNA of British Nuclear Test Veterans and their Families

Investigating the DNA of British Nuclear Test Veterans and their Families.

Alex Perry, CHRC Communications and Engagement Officer, gives an update on the Genetic and Cytogenetic Study.

Why are we doing this study?

The British Armed Forces, including many readers of Exposure Magazine, participated in nuclear weapons tests at various sites in Australia and the South Pacific in the 1950s and 1960s. Since that time a number of veterans and their descendants have experienced medical conditions such as cancer and infertility. Furthermore, many of you are concerned that these health issues could have been caused by possible exposure to radiation during your military service.

To address these concerns the UK Ministry of Defence commissioned a number of epidemiology (health) studies which included examining the mortality and cancer incidence of nuclear test veterans (NTVs) compared to a control population. These studies concluded that overall levels of mortality and cancer incidence were similar to those in a matched control group meaning that participation in the tests had no adverse effects on those measured health outcomes. Furthermore, there is no convincing evidence from other epidemiology studies to date that exposure to radiation in a parent before conception could lead to ill-health in their children. That said, there is experimental evidence gained from the exposure of cells and animals to radiation under laboratory conditions that show some effect which is why research into this ‘genetic legacy’ question continues.

Chromosomes (packages of DNA) can be damaged by a variety of factors. For example, it has been established that radiation can break the two strands of the DNA double helix that is found in each chromosome. Radiation can also damage the four kinds of nucleotides (A, T, C and G) that are present in DNA. There are biological processes for repairing chromosomes, but sometimes these repairs are performed incorrectly.

Professor Al Rowland at Massey University conducted a cytogenetic study (cytogenetics is the study of chromosomes) which compared the chromosomes of 50 New Zealand NTVs with a control group. They found that a certain product of incorrect chromosome repair (aberrations known as a reciprocal translocation) was 3 times more frequent in the New Zealand NTVs than in the control group, which he and the co-authors of their report regarded as evidence of exposure to radiation. The authors also reported that some of the different types of chromosome aberrations they observed indicated that radioactive materials may have entered the bodies of the New Zealand NTVs.

A cross-parliamentary enquiry recommended that the chromosomes of British NTVs be investigated using similar research techniques for assessing the incorrect products of repair of chromosomes that Professor Rowland used. This current project acts on that recommendation and additionally is extending the research to include children of British NTVs. Our study is further broadened to that carried out by Rowland as it will also analyse the complete sequence of nucleotides present in the DNA of the study participants, a process known as whole genome sequencing.

What is new about this research?

It is a legal requirement that all research studies which involve human participants must obtain ethics approval from the appropriate UK organisations. The ‘Genetics study team’ successfully obtained approval from all required professional bodies after a lengthy 17 month process.

How were participants chosen for this study?

It is not possible to participate in this study without having first been invited by our study team via a letter from your GP. This means that we cannot accept the many generous offers from veterans and family members to volunteer for this study. Our reason for doing this is summed up by a concept called ‘selection bias.’

For statistical purposes, it is not necessary for this study to assess all of the UK’s nuclear test veterans and the corresponding control population. We have calculated that based upon the findings of Rowland, a comparison between 50 test family trios and 50 control family trios is of sufficient size to see a similar effect, if such as effect is present in our population.

Assessing the DNA of the 300 people in our study is a considerable amount of work and we are on course to achieve this. However, an important question for us to answer is “How representative are the nuclear test veterans that we have chosen compared to the nuclear community as a whole?”

In many respects, we are in a similar situation to a polling company such as Ipsos MORI who seek to predict the choices of millions of voters in a General Election based on surveying a few hundred of them. In this case the best practice is select voters or participants at random.

If voters volunteered to take part in a political survey the randomness would be reduced. The poll would be skewed in favour of those most keen to share their views and not capture the opinions of the more reserved voter. Pollsters call this skewing selection bias.

Thus, the ‘Genetics study team’ is selecting participants using a method called ‘stratified random selection’ in order that both the nuclear community and the scientific community can have greater confidence in the findings of the study.

However, there are criteria for which a NTV must meet to be chosen for this study.

Firstly, we are seeking the youngest veterans who were most likely to have been exposed to radiation (this is how the selection is stratified) based, in part, upon the number of operations attended and specific high-risk duties. This includes the RAF pilots who flew into nuclear mushroom clouds on ‘sniffer’ missions, the ground crew who cleaned those aeroplanes, naval crew who were aboard the HMS Diana when it sailed through a fallout cloud and personnel involved in tests at Maralinga.

Secondly, we are excluding people who have had either chemotherapy or radiotherapy for cancer. The reason for these exclusions is that these treatments damage chromosomes and potentially result in incorrect chromosome repair. For example, if we were to analyse the chromosomes of a NTV who had undergone radiotherapy it would not be possible to state whether any incorrectly repaired chromosomes observed were due to radiotherapy or due to possible exposure to radiation during the nuclear tests.

Thirdly, only those veterans who have a surviving partner and a child they have had together will be eligible to take part. This is because we need to analyse the DNA of family trios to answer the question of ‘genetic legacy’.

We respect the principle of consent. Every member of the family trio that we approach (father, mother and child) must freely choose to take part based on the information we provide to them or we can’t examine the DNA of any of them.

We also respect the right to privacy. Indeed, this right is protected by law and adhered to throughout the study. The selection of veterans for invitation is carried out using anonymised records, in addition, the blood samples are coded to ensure anonymity when they arrive at the CHRC. Our scientists do not know the names of the study participants and thus they do not know whose DNA they are examining. This not only serves to protect individuals’ personal information but is crucial to ensure scientific rigour when evaluating the findings of the study.

The study recruitment steps are summarised in the flowchart below. It is understood that the ‘child’ in these studies is an adult. 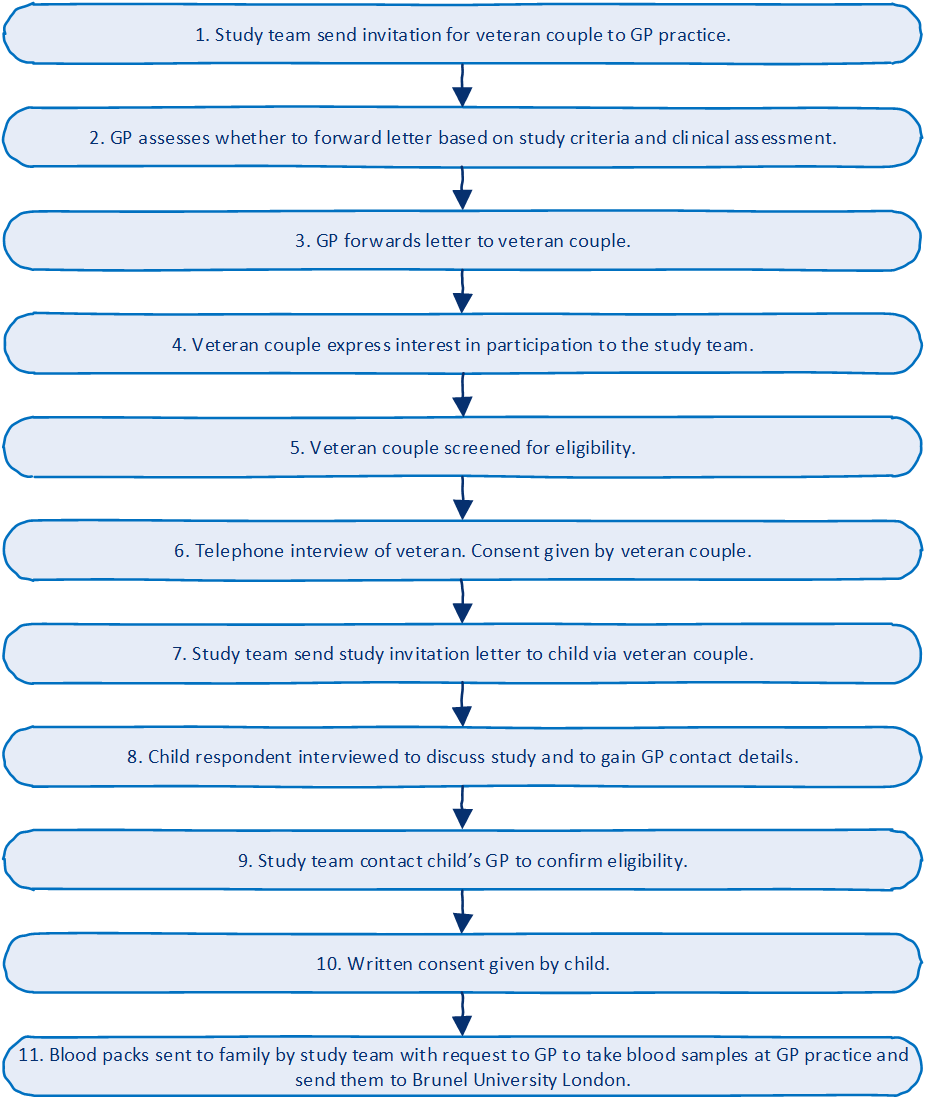 We are finding that it takes approximately ~6 weeks to recruit a family trio by following the steps given in the flowchart. At the time of writing this article we are over halfway in recruiting the target number of participants necessary for our study which is great progress. We are also making good progress in our analysis stage of this study with both cytogenetic and whole genome sequence analysis of blood samples already received well underway.

What are we looking for?

Nuclear test veterans may have been issued with dosimeter film badges during their military service to monitor their level of exposure to ionising radiation. The science of the relationship between radiation exposure and chromosome damage has advanced to the level that your chromosomes can be regarded as natural dosimeters.

It is possible by identifying specific types of incorrectly repaired chromosomes (aberrations) not only to estimate the dose of radiation that a person has received, although it should be highlighted that this estimate will have large errors for historical exposures, but the incorrectly repaired chromosomes may also infer what type of radiation that person was exposed to. Our scientists will look in particular for evidence of exposure to alpha particles. Alpha particles can be blocked by a few pieces or paper, skin or by a few centimetres of air. However, if someone did inhale or ingest a radioactive material (perhaps from nuclear fallout) which emitted alpha particles then this would cause genetic damage in the body.

Human DNA is like military intelligence in that it makes use of codes. These codes, known as genes, contain information about us such as the colour of our eyes, the colour of our hair or in my case the genes for losing my hair. These genetic codes can be corrupted which may or may not progress to a health condition such as cancer. A wide variety of environmental factors, which we are all exposed to throughout our lives, including chemicals and radiation have been shown to corrupt DNA, a process called DNA mutation. A new mutation that arises in a germ cell (egg or sperm) of one of the parents, is called a de novo (new) germline mutation. Our scientists will look out for the presence of DNA de novo germline mutations in children of nuclear test veterans.

Will this study answer the health questions of the nuclear community once and for all?

Unfortunately, the short answer is “no”. Our study has been designed to seek out evidence for genetic damage caused by exposure to radiation. Having a higher level of genetic damage is thought to increase the risk of developing some medical conditions, but this outcome is fortunately not an absolute. So if we were to find evidence of radiation-related genetic damage in the NTVs or in their families we could not conclude that this was the cause of the range of reported ill health issues. What it would do would be to direct additional research studies where the meaning for health may be explored in much greater detail.

All of our findings from this study will be published in scientific journals. When our articles have been published we will share our results with the nuclear community including you the readers of Exposure Magazine.