In this article, we discuss the non-cancer health effects of ionising radiation on exposed individuals. We begin by explaining how ionising radiation can cause damage to cells that can lead to cellular death and, how this in-turn can produce damage in tissues and organs known as ‘tissue effects’.

All early and most late tissue effects are deterministic, i.e. they occur as a result of the same biological mechanism which we will now explain.

When ionising radiation passes through a cell there is a transfer of energy to that cell which removes electrons from atoms and molecules in a process called ionisation. Ionisation triggers chemical reactions which can damage the cell and in particular damage the DNA inside the cell. In response to this damage, the cell can very efficiently repair this damage, incorrectly repair the damage or instruct itself to die in a process called apoptosis. Incorrectly repaired damage may also lead to cell death. Overall, this means that individual cells can be lost through cell death if they are exposed to radiation¹.

In the body, organs are made of tissues and tissues are composed of billions of cells. Thus, depending upon the number of individual cells lethally damaged then this may affect the normal working of tissues and organs. The precise biological effects depend upon the radiation dose as shown in Figure 1. This shows that as the radiation dose is increased an increasing proportion of cells in a tissue are lethally damaged.

Figure 1. The effects of ionising radiation on cells and tissues.

Scientists have found that there is a minimum dose, known as the threshold dose, which must be received for enough cells within a tissue to be lethally damaged so that clinical symptoms arise². Below the threshold dose, as only limited cells are affected, tissues and organs work correctly. Above the threshold dose the severity of any symptoms seen will increase as the dose increases because there is an increasing amount of cell death.

Health effects brought about by this process are called ‘deterministic effects’, because they will occur if the threshold dose for a given effect is achieved or exceeded.

This is the energy absorbed in joules per kilogramme by a substance such as human tissue.

Above the threshold dose the occurrence of deterministic effects increases with dose up to 100% as shown in Figure 2. This graph shows that every member of an exposed group of people will have a deterministic medical condition if they receive enough radiation. 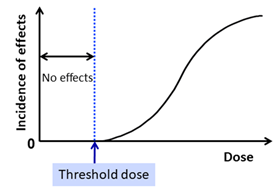 Figure 2. The incidence of deterministic effects versus the dose.

Radiation sickness is caused by a person receiving a high radiation dose (threshold dose ~ 0.7 Gy) to the whole body within a short space of time. Some people have had this condition as a result of the atomic bombings of Japan, the accident at the Chernobyl nuclear power plant and other industrial accidents¹.

Radiation sickness begins with early symptoms including nausea, vomiting, diarrhoea, headache and fever. The number of different symptoms experienced by the patient and their severity increases as the dose received increases as shown in Table 14.

Then there is a latency period when the patient appears to have recovered from these early symptoms. However, cells can continue to die during this period as a result of the initial exposure5.

The blood production system includes stem cells that are located in the bone marrow. Stem cells can make copies of themselves or change to become a more specialised type of cell (a process called differentiation) such as a lymphocyte (white blood cell), a red blood cell or a platelet as shown in Figure 3. 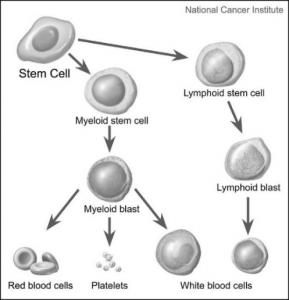 If the bone marrow has been exposed to enough radiation this will kill stem cells and hence reduce an individual’s number of blood cells, including their lymphocytes (lymphocyte count) as shown in Figure 45. The graph shows the lymphocyte count falling to different extents over a 2 day period. 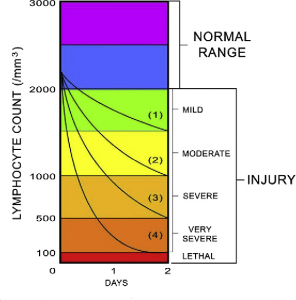 Lymphocytes are an important part of the immune system and a reduction in their number renders the body vulnerable to infections. Patients may recover from these infections, but some are so serious that they may not recover. The main cause of death from a whole-body radiation dose in the region of 2-6 Gy is from damage to the red bone marrow¹. Above 6 Gy ionising radiation can also damage the gastrointestinal system5 (this includes the oesophagus, the stomach and the intestines) which increases the risk of death.

The patient’s chances of survival for doses below 8 Gy can be improved if the patient receives suitable medical care as shown in Table 24.

If a dose of 10 Gy or greater is received the combination of red bone marrow and gastrointestinal damage causes death within two weeks5. Doses greater than 20 Gy can damage the cardiovascular system and the central nervous system which causes the patient to die in three days or less.

There are other organs which will show health effects within a few weeks after exposure if the threshold dose or greater is received including those required for sexual reproduction (Table 3)³.

Table 3. Organs affected by radiation a short period of time after exposure.

Ionising radiation can both reduce sperm production in men and kill sperm cells and this sterility in males can be temporary or permanent depending on the dose. Radiation can damage a woman’s ovaries and damage her eggs. However, these effects will only occur if the threshold doses are exceeded and for permanent sterility for both sexes these threshold doses are high³.

In this article we have discussed how radiation can damage tissues and organs and that this is referred to as tissue effects. The article has stated that most tissue effects are deterministic which means that they are the consequences of cellular death within organs. The threshold dose has been discussed with respect to the relationship between dose and health outcomes including that the severity of effects increases with dose above the threshold dose. Indeed, in all of these examples the health effects depend upon the dose received.

The various stages and symptoms of radiation sickness and other early health effects such as sterility have also been discussed, including that some of the body’s organs and systems are more sensitive to radiation than others.