What is the aim of this project?

The aim of this PhD project is to examine factors associated with cognitive functioning. This is an important aspect of healthy ageing and quality of life. There is no current research on the cognitive/mental health effects upon British nuclear test-veterans from witnessing nuclear tests, and more research is urgently required. However, this aspect is being explored with increasing priority for people elsewhere, affected by radiation effects from the Chernobyl and Fukushima incidents. A special feature of this veteran study is an examination of radiation ‘exposure worry’ and cognitive functioning in later life.

How will we conduct our research?

The overall project will invite members of the British nuclear test-veteran community to participate and will involve data gathering via in-depth interviews, questionnaires, and cognitive assessments. In May 2018, we conducted a focus group discussion with six test-veterans and two test-veteran wives at the British Nuclear Test Veterans Association Annual General Meeting in May. The discussion was fascinating regarding the test-veterans’ experience during the nuclear testing programme and the impact that it had left on their lives. The discussion was also very insightful regarding the development of our proposed ‘exposure worry’ scale, in terms of the language used and the particular aspects which constitute ‘exposure worry’. Recently, we held telephone discussions with a handful of test-veterans to gain further insight into the design and content of the proposed scale.

Currently, we are testing our proposed ‘exposure worry’ scales to ensure that it is valid and that it “works”. In order to ensure that our scales work, we need as many test-veterans as possible to take part. This will result in a useful tool to examine the presence and severity of worry in the nuclear test-veteran community. This may also be used to indicate whether or not extra support must be put in place for test-veterans to help overcome their worry.

For the next stage of the project, we will be conducting cognitive assessments with the test-veterans over telephone, in relation to their levels of ‘exposure worry’. Participants will be required to complete a few very short questionnaires and return them to us, before taking part in a 10-minute telephone test of cognitive functioning. 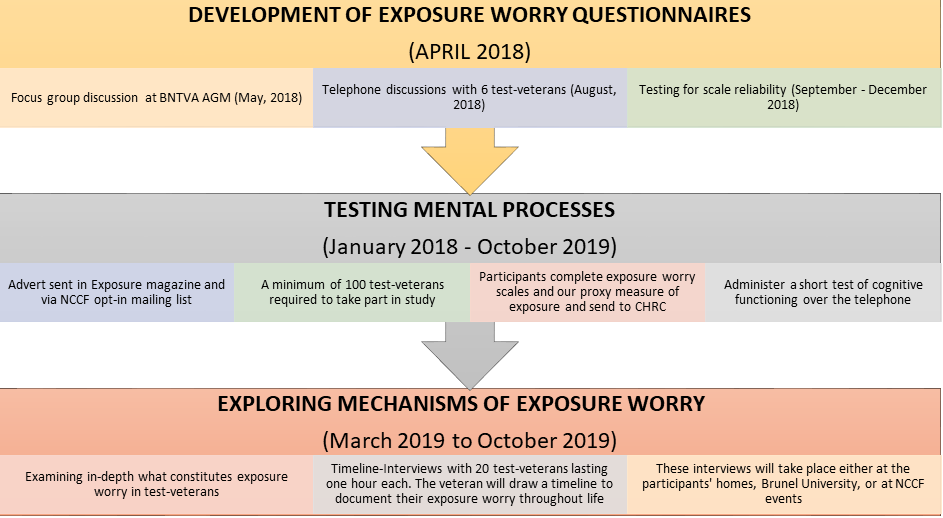 If you wish to take part in any stage of the project, please contact CHRC:

Why is this important?

What do we already know about radiation exposure, worry, and cognitive functioning?

Aside from the physical effects of radiation exposure, the World Health Organisation has argued that mental health impact is one of the biggest consequences following a nuclear incident. For example, widespread anxiety and depression in both contaminated and decontaminated regions surrounding the Chernobyl area have been observed (Pastel, 2002). Even in people who were exposed to very low levels of radiation, the psychological effects can be large and persistent (Danzer & Danzer, 2016). The term radiation-anxiety is used to describe the worry regarding the possible negative health effects of radiation exposure, as well as any perceived stigma relating to radiation exposure (Fukasawa et al. 2017).